Folding Fans - Kimono Patterns
VAT and GST are automatically collected at checkout *on orders under €150/£135*, so you won't have to worry about shipping delays or paying taxes once your order arrives. Click the link to learn more. 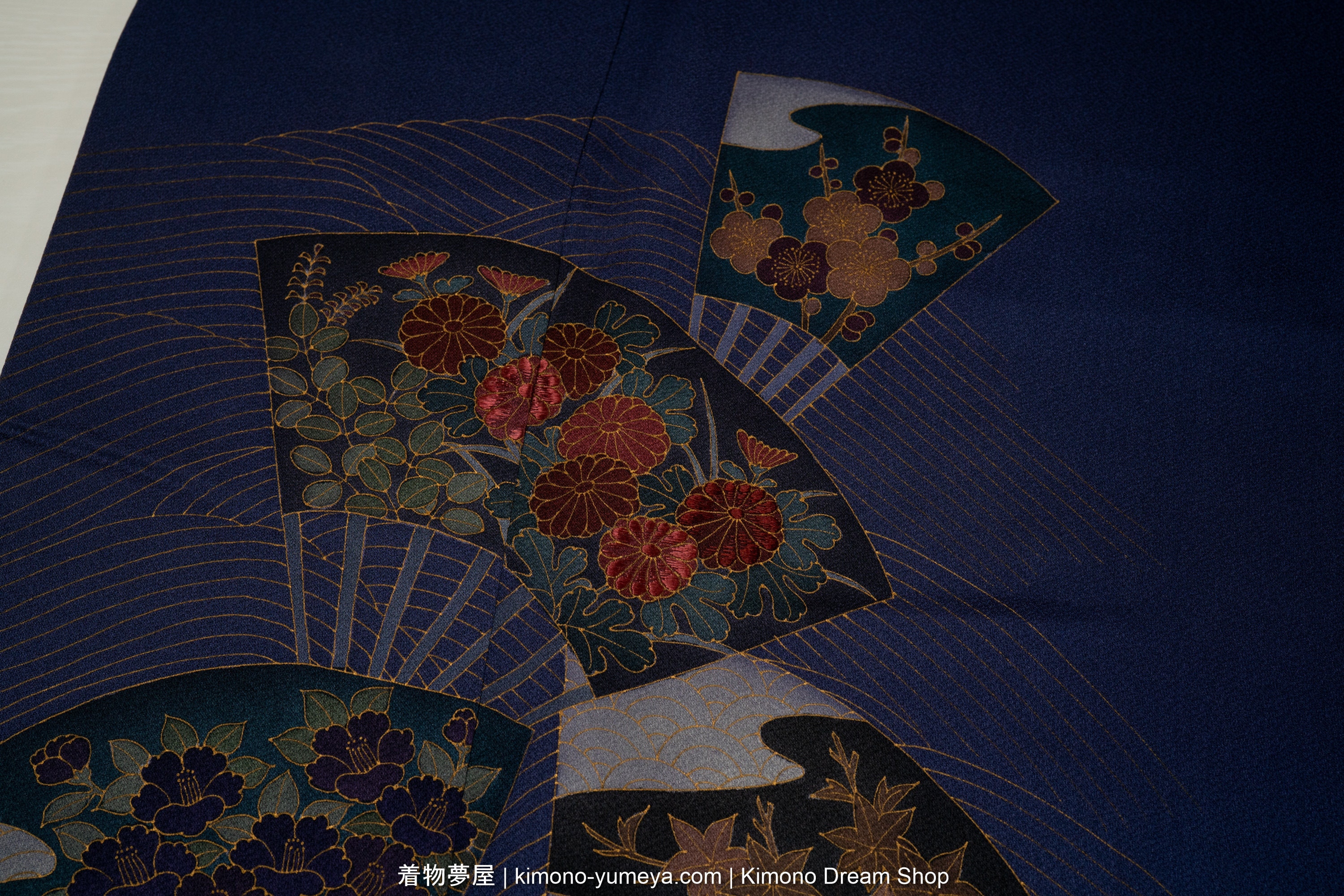 While fans don’t have a specific meaning when used as a pattern on kimonos, the patterns inside them, if any, carry the meaning. Fans can also be arranged or placed upon one another in order to resemble other patterns, such as waves (seigaiha) or butterflies. 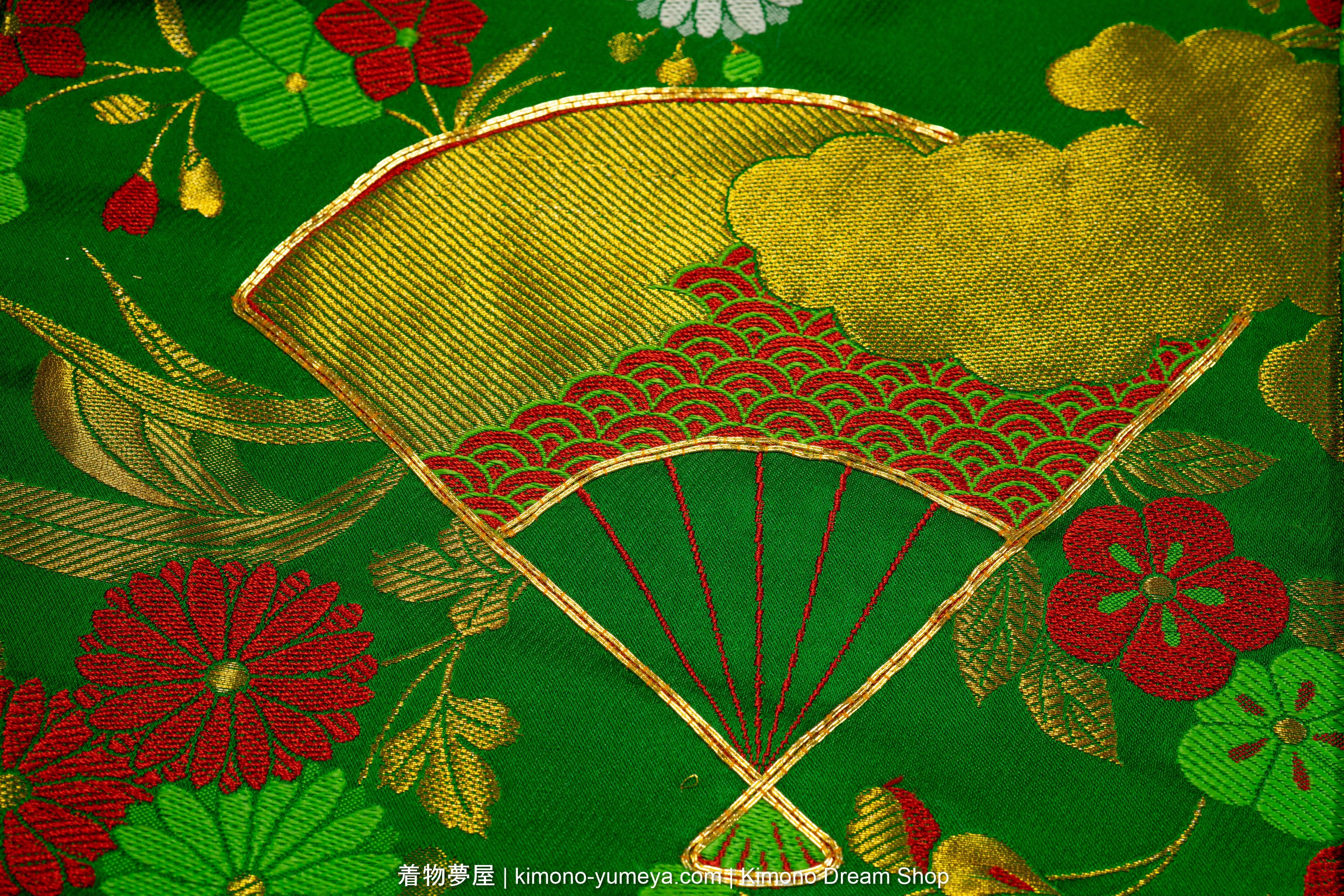 Gold folding fan with red seigaiha pattern and gold clouds inside, surrounded by flowers and clouds, all on a green background.

There are two kinds of fans. The first is folding fans (sensu/扇子) and non-folding, circular fans (uchiwa/団扇). Folding fans are more complicated to create and can hide extravagant, vibrant patterns that are shown off, so these are much more common than the non-folding style. 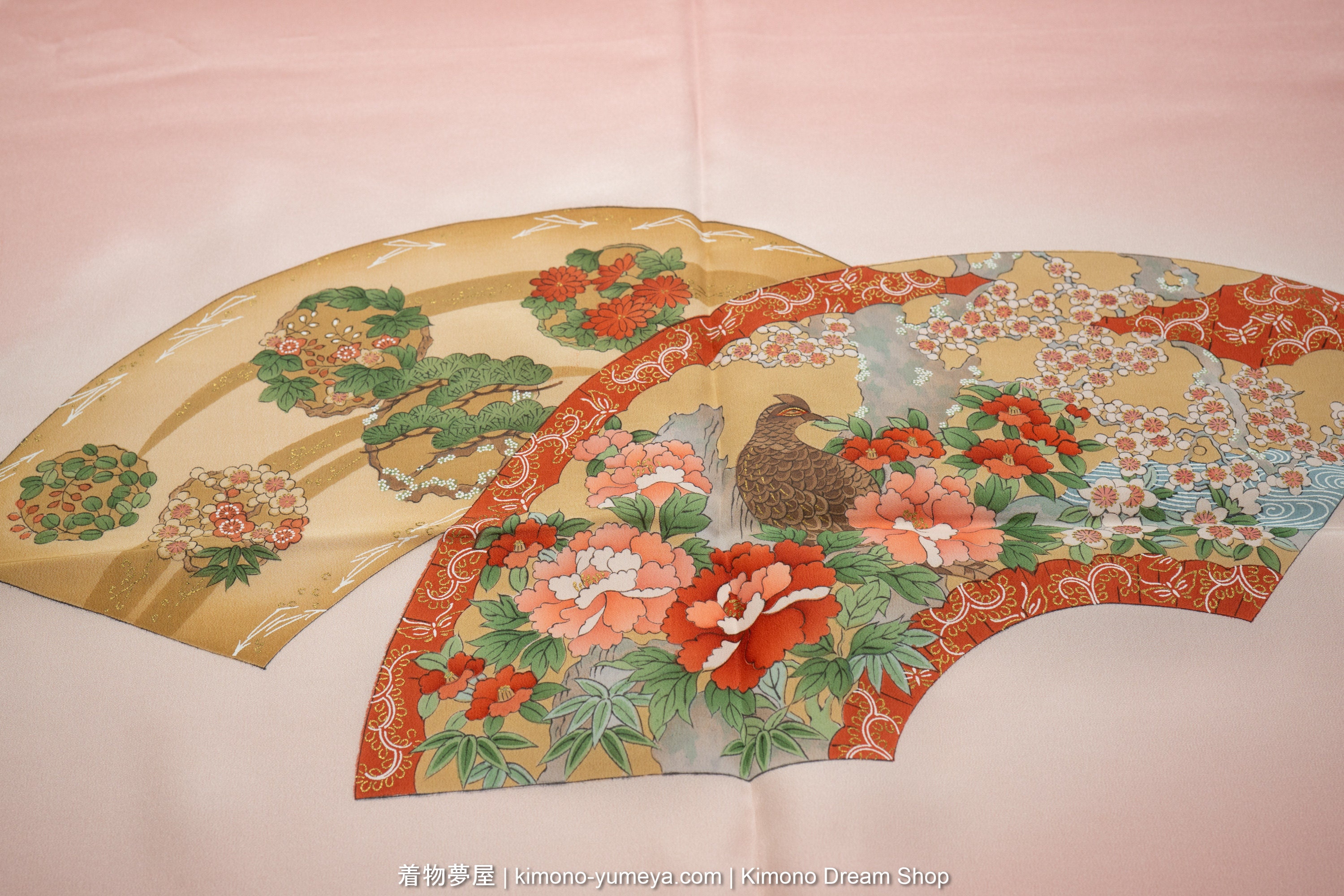 Scenic springtime view of a bird amongst flowers inside a folding fan, with circular floral patterns on another folding fan behind.

When it's a simple, flat, semi-circle-esque design, it's known as "jigami/地紙." This is the name for the paper part of the fan, and using this allows for complicated, unbroken patterns inside. 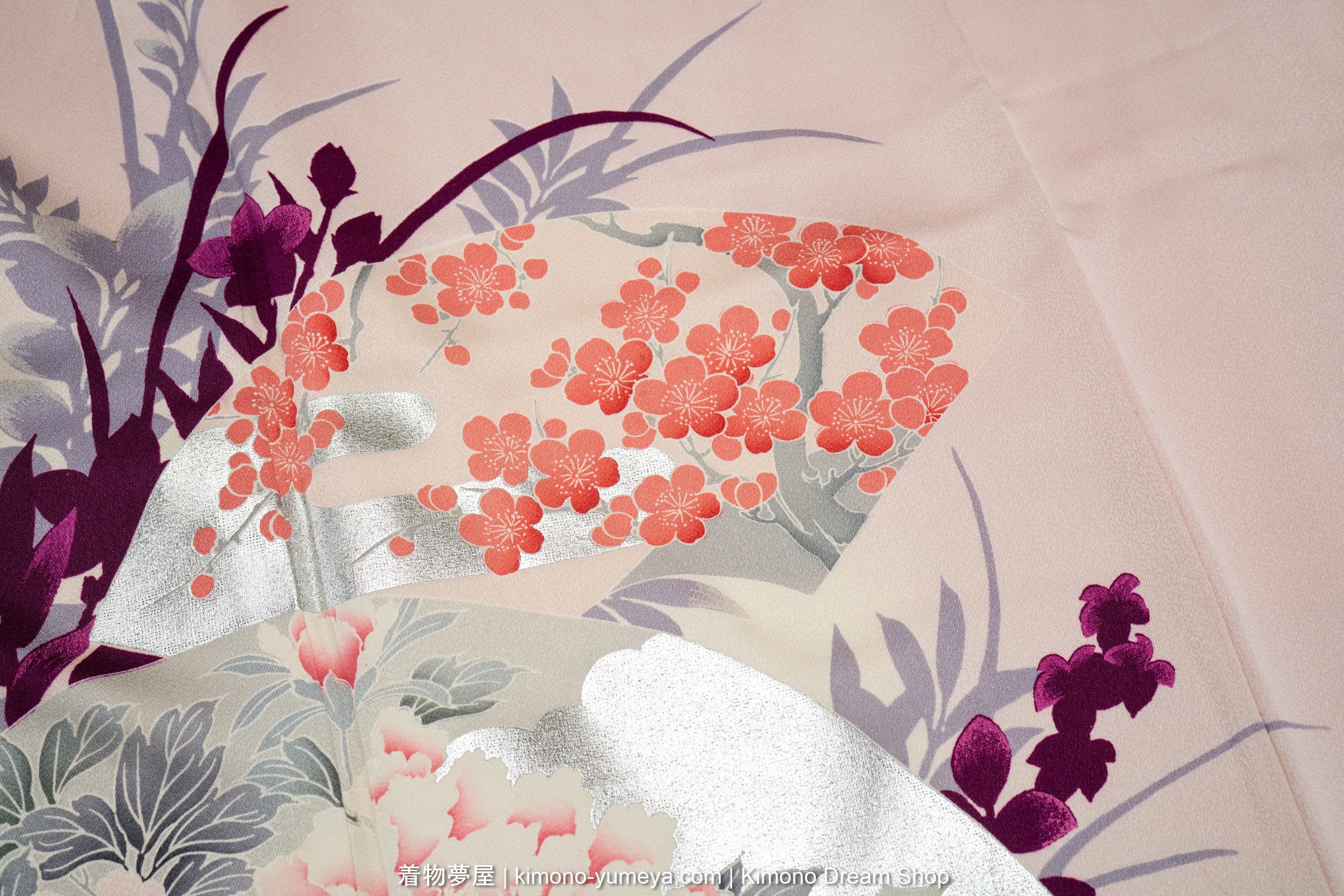 Pink plum blossoms on a gray tree, with silver clouds behind them, with a floral scene on another folding fan.

Another name for “folding fan” in Japanese is “suehiro/末広,“ which means “folding out” or “endless.” 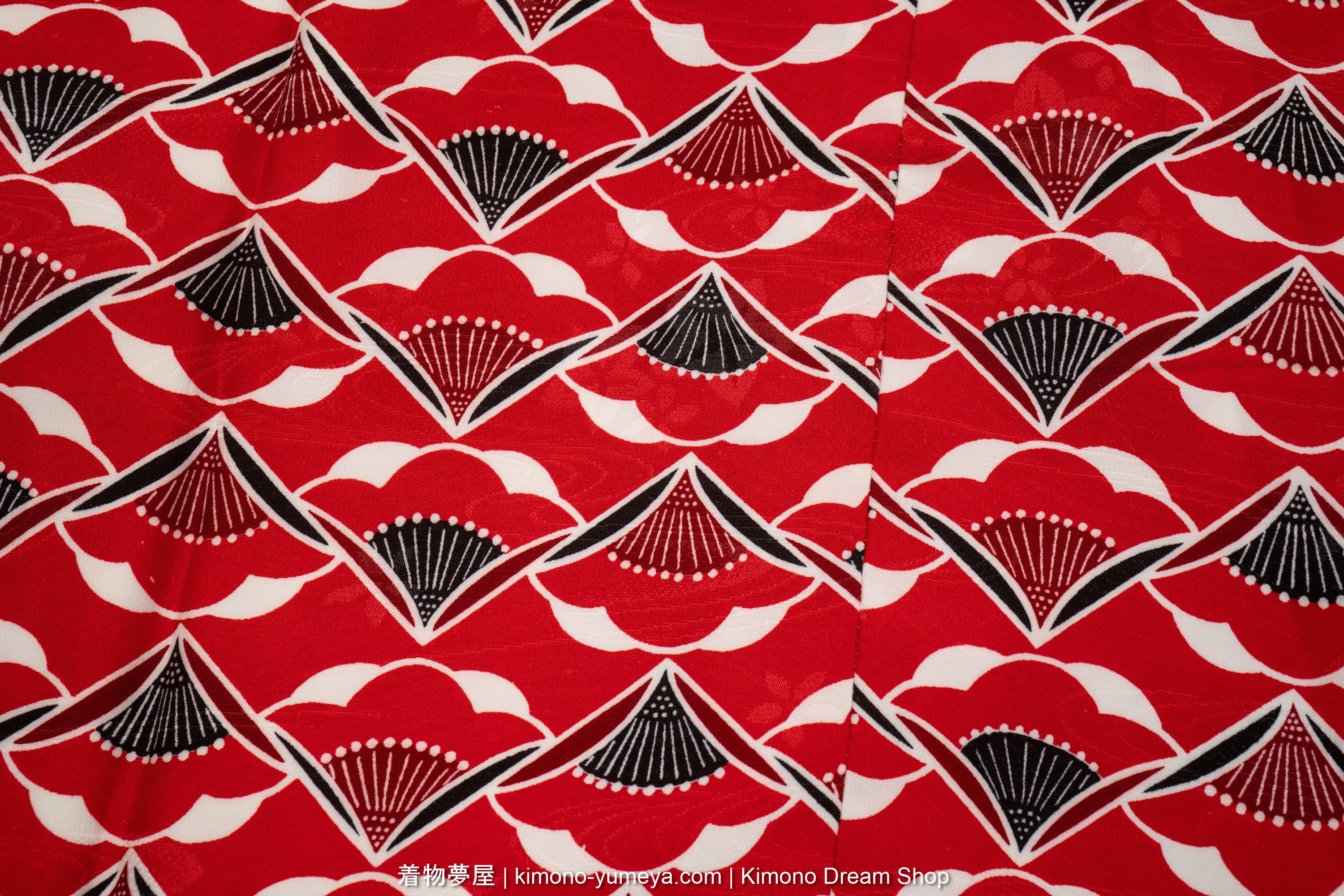 Red and black plum blossoms in the shape of folding fans creating an endlessly repeating pattern.

In the Heian period of Japan (794-1185), aristocrats would use a style of folding fan known as “hiougi/檜扇,” which has a tassel on each end. As well as the tassels, these have extravagant patterns of things like pine trees, cranes, waves, turtles, and plum trees.